Peter has served as Principal Clarinet of the TBSO since 1988, and has also served as principal clarinetist of Orchestra London Canada, performed with Tafelmusik (on historical clarinet) and Les Violons du Roy, as well as with the Milwaukee Symphony, Winnipeg Symphony, Kitchener-Waterloo Symphony and Stratford Festival Orchestras. Peter is currently on the faculty at Wilfrid Laurier University and in the past has held teaching positions at Western University and Lakehead University.

Get to know our soloist better by reading our interview below, and don’t forget to reserve your tickets for the concert on January 13th, HERE! 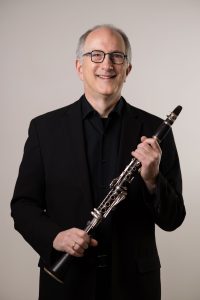 Q: What is your favourite piece of music?

A: It’s so hard to pick just one piece. It can depend so much on my mood, the given circumstances of a particular day, you name it.

Recently I was listening to the 2nd movement of Mozart’s A major Piano Concerto (#23 K. 488) and not only was I struck (yet again) by the beauty of the melodic line but I found myself quite intrigued by the bass line as well. It added a new dimension to the piece for me.

I’ve also been having a bit of a love affair with Richard Strauss’ Der Rosenkavalier. I listened to it as I drove up to Thunder Bay in October, and much like the vistas of the north shore of Lake Superior, found it to be breathtakingly beautiful. There are certain sections and harmonic passages which have become part of my internal soundtrack.

Q: What is your favourite musical memory?

A: Playing Haydn’s Mass in Time of War and the Mozart Requiem at Lincoln Center in NYC, a couple of weeks after the 9/11 attacks. The tour and program had been planned months in advance – who knew it would become such a poignant, moving experience?

Playing Italian opera excerpts in Italy with an Italian conductor and Italian singers for an Italian audience. It was so powerful realizing that everyone in attendance understood and knew the meaning of everything that was being performed.

The last time I performed the Mozart Concerto with the TBSO (Jan 2012, Kevin Mallon conducting) Having the opportunity to perform a piece you love with people you have known a long time and who have become good friends and colleagues, for an audience who has seen you “grow up” as a musician etc. Amazing!

Q: Does music play a part in your everyday life?

A: Yes! I’ve always been in the habit of having something playing regardless of what I’m doing, especially when I’m on my own;  company of a sort.

A few years ago we purchased a Sonos speaker system which has given us access to radio stations/broadcasts from around the world. It has introduced me to new music, performers, languages and has become an excellent background to cooking and eating in particular.

A: Inherently, I’m a pretty shy person. Performing gives me the opportunity to communicate with other people and share thoughts/ideas that may otherwise remain “unspoken”.

Q: How did you decide to become a professional musician?

A: As a child I was intrigued by music/the arts. I wrote a number of plays (long since destroyed) and was somewhat obsessed with Lego – I was into creating other worlds. I also sang, a lot. One could even say constantly, at times. In grade 7 I started to play the clarinet. Initially I didn’t work at it much – I guess I had a reasonable bit of natural aptitude – but when I hit high school I became a little more obsessed and discovered the joys, dare I say the benefits, of practising. My parents wanted me to keep as many doors open as possible, so if you looked at the courses I took my last year of high school – three Maths, Physics, Chemistry and English – Music might have been the last possible career choice you would think I might make. But I had become fascinated with music. Towards the end of high school I started studying with the principal clarinettist of the NACO and I began imagining what the life of an orchestral musician would be like. I went to University and from then on I practised, ate, practised, slept, practised, etc. and have been fortunate enough to support myself as a clarinet player since I was 22.

Q: What advice would you give to young aspiring musicians?

A: If you feel you have the bug, find a good teacher to help guide you – the bad habits we pick up when we first begin are the hardest to get rid of – and practise…

but mostly look for the joy in what you are doing and share that with others.